. Return to all publications

Increased ecological disturbances, species invasions, and climate change are creating severe conservation problems for several plant species that are widespread and foundational. Understanding the genetic diversity of these species and how it relates to adaptation to these stressors are necessary for guiding conservation and restoration efforts. This need is particularly acute for big sagebrush (Artemisia tridentata; Asteraceae), which was once the dominant shrub over 1,000,000 km2 in western North America but has since retracted by half and thus has become the target of one of the largest restoration seeding efforts globally. Here, we present the first reference-quality genome assembly for an ecologically important subspecies of big sagebrush (A. tridentata subsp. tridentata) based on short and long reads, as well as chromatin proximity ligation data analyzed using the HiRise pipeline. The final 4.2-Gb assembly consists of 5,492 scaffolds, with nine pseudo-chromosomal scaffolds (nine scaffolds comprising at least 90% of the assembled genome; n = 9). The assembly contains an estimated 43,377 genes based on ab initio gene discovery and transcriptional data analyzed using the MAKER pipeline, with 91.37% of BUSCOs being completely assembled. The final assembly was highly repetitive, with repeat elements comprising 77.99% of the genome, making the Artemisia tridentata subsp. tridentata genome one of the most highly repetitive plant genomes to be sequenced and assembled. This genome assembly advances studies on plant adaptation to drought and heat stress and provides a valuable tool for future genomic research. 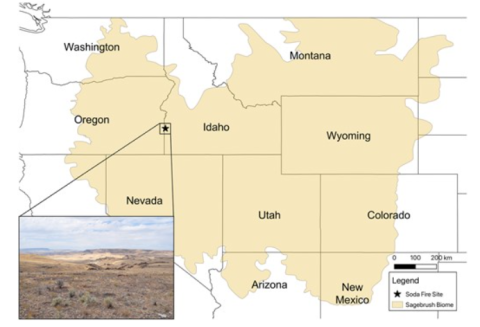