This paper explores how a caterpillar fungus is being affected by climate change and human use/management activities. Results suggest this species does not seem to be adapting well to these pressures, which leads to the next research question (currently underway) of how humans can adapt their management practices to prevent it from declining further. Hopping and her collaborators integrated local knowledge and mapping to reach these conclusions. The kids' version introduces these ideas at a level appropriate for lower-level high school classes and includes study questions and an answer key for teachers so that they can think about and discuss these topics in more depth.

Kelly Hopping is assistant professor in Human-Environment Systems at Boise State University. She was hired through the Idaho EPSCoR MILES award and is currently involved with GEM3.

ISU fish ecologists Ernest Keeley and Janet Loxterman have identified some of the last remaining native, genetically pure populations of Cutthroat Trout, including distinct subspecies variations, in the areas around Pocatello.

Recently, Keeley found a genetically pure population of cutthroat trout right under his nose, in a tributary of the Portneuf River that dumps into that stream within the city limits of one of the largest cities in Idaho, Pocatello. That tributary, City Creek, also features one of the most popular trails in the area and where it dumps into the Portneuf, the river is severely degraded. 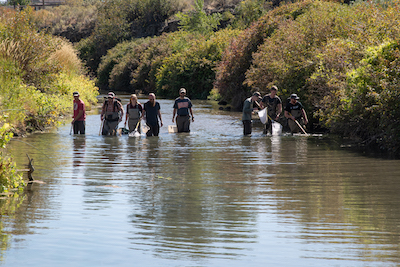