. Return to all publications

Global Composition of the Bacteriophage Community in Honey Bees

The microbial communities in animal digestive systems are critical for host development and health. They stimulate the immune system during development, synthesize important chemical compounds like hormones, aid in digestion, competitively exclude pathogens, etc. Compared to the bacterial and fungal components of the microbiome, we know little about the temporal and spatial dynamics of bacteriophage communities in animal digestive systems. Recently, the bacteriophages of the honey bee gut were characterized in two European bee populations. Most of the bacteriophages described in these two reports were novel, harbored many metabolic genes in their genomes, and had a community structure that suggests coevolution with their bacterial hosts. To describe the conservation of bacteriophages in bees and begin to understand their role in the bee microbiome, we sequenced the virome of Apis mellifera from Austin, TX, and compared bacteriophage compositions among three locations around the world. We found that most bacteriophages from Austin are novel, sharing no sequence similarity with anything in public repositories. However, many bacteriophages are shared among the three bee viromes, indicating specialization of bacteriophages in the bee gut. Our study, along with the two previous bee virome studies, shows that the bee gut bacteriophage community is simple compared to that of many animals, consisting of several hundred types of bacteriophages that primarily infect four of the dominant bacterial phylotypes in the bee gut. 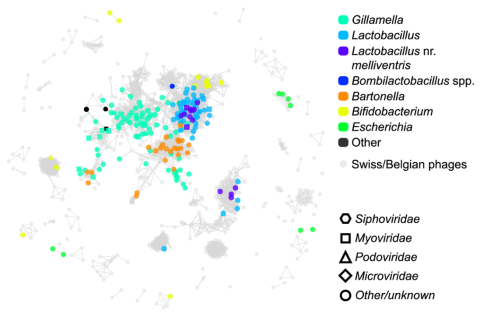 Network diagram showing clusters of phages from honey bees, classified by host (top) and viral (bottom) taxonomies. Clustering is based on the similarity between protein-coding genes among viral contigs. Phages from the studies of Deboutte et al. (32) and Bonilla-Rosso et al. (33) are shown in gray.